THE BACHELORETTE: JoJo cannot stop thinking about her ex and his dad bod. *Drink* every time she mentions Ben and Lauren B. Also, how much do you hate JoJo for pulling off those firefighter pants?

Group Date #1: Firefighter Training
Erectile Dysfunction is scared of the firefighter course… hasn’t he seen some pretty scary things in his day? Meanwhile back at the mansion, Chad is wearing his luggage as a weightlifting belt while all of the other guys are drinking mimosas and singing. I don’t know what’s worse. I expect James Taylor and his Bach Bros to release their new single “JoJo” on iTunes by the end of the episode.

Going out on a limb to say it’s unfair that Grant the firefighter is on this date. On the other hand, Wells is pulling a Kelsey and I think this season of the Bachelorette might have more medical emergencies than the latest season of Survivor. Poor Wells (and his extreme hand gestures) couldn’t have beat Luke or Grant in this race even if he had that acapella group from the first episode helping him.

While Grant is all “I won’t leave the house in the morning without waking you up and giving you a kiss” (JoJo wants a husband… not an alarm clock), Luke looks like a greaser in that leather jacket (and the kind who definitely failed English).

Group Date Rose: Wells (AKA he the got the participation award)

Derek and JoJo are going to make serious decisions together on this date like whether to take a helicopter or a private jet. The pilot holding the “South” sign for the next Bachelor, and the one with the “North” sign can go to Paradise. Sidenote: Am I the only one who expected the cast of Fuller House to show up in San Diego? #WastedPlugOpportunity

“We made like, so many good decisions together on our date. You’re totes marriage material.” – JoJo
“My last relationship didn’t end well. It was like so tragic. It’s so hard for me to love again.” Derek made it seem like his ex-girlfriend was kidnapped or murdered. Dude doesn’t handle being cheated on well… so it makes sense he’s sharing a girl with 20 other men.

Back at the mansion, Damn Daniel’s tanktop should cost him the rose and *drink* because Chad isn’t here to make friends. 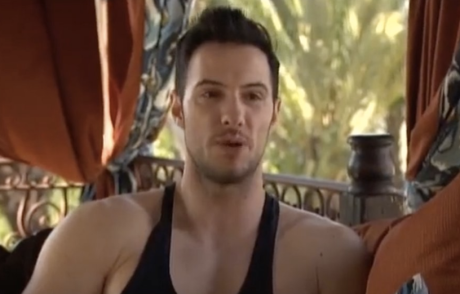 At this rate, JoJo will still be talking about Ben in the finale. Lauren B, watch yourself girl.

These “competitions” are a joke and I think the SportsNation guys would rather debate Lebron v Steph for the millionth time (Shoutout to JoJo for pretending to have an opinion on the subject in the intro #SportySpice). I also think it’s safe to say America is lucky Jordan Rodgers never got to do a touchdown dance in the NFL after that performance and none of these guys ever played dizzy bat.

“Yo JoJo, marry me. But only if you stop being such a naggy bitch.” – Chad who has clearly never seen an episode of The Bachelorette and actually used the word NAGGY. #EverybodyHatesChad #AndHisFinances

“All of the men are acting. I’m real. Like the J.Lo song.” – Chad probably has a really douche-y Instagram.

“Hi, I’m James Taylor and I love food, God and sharing a name with a famous singer.” – James T who actually made JoJo cry with his Buzzfeed style list of things he loves

Alex is definitely measured at Six Flags to see if he’s tall enough for the rides.

“I can’t pretend that you’re the most amazing girl I’ve ever met because I don’t really know you. You’re sups hot though and I’m taking care of my dead mom’s dog so plz give me a rose.” – Chad

Chad proves once again he isn’t here to make friends by stealing JoJo before she even enters the cocktail party. At least he brought wine. As far as her other suitors, calling it now that Robby will start a bowtie line after he is eliminated around week 6 while Bachelor Superfan is 100% stealing napkins, cups and anything he can get his hands on from the mansion. 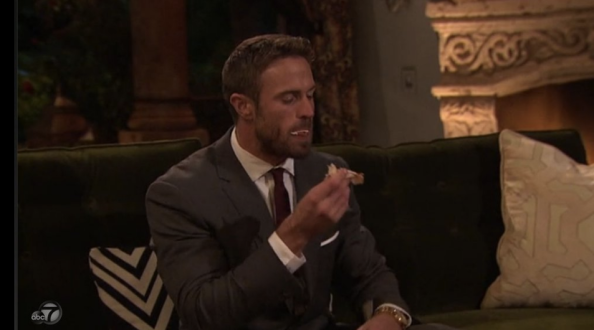 “Is this an effing joke?” – The Bachelor Interns when they saw JoJo and Will toilet papering the mansion

Update: Confirmed that “I count calories and eat during rose ceremonies” Chad definitely has a really douche-y Instagram.

Eliminated and not memorable enough to remember at Men Tell All: Bachelor Superfan, Hipster and Will.

REAL HOUSEWIVES OF NEW YORK: God Bless The Berkshires. This epic episode picked up where we left off with Bethenny and Luann having a “who wore it better” fight over their hair and Luann’s new boyfriend who Ramona briefly dated.

“Why are you so obsessed with me? MY HAIR LOOKS SEXIER PUSHED BACK THAN YOURS.” – Luann

“Ex-boyfriends are off limit, that’s like the rules of feminism!” – Ramona 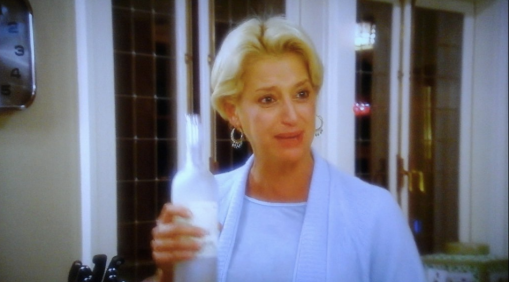 “Did you have an awesome time? Did you drink awesome shooters, listen to awesome music, and then just sit around and soak up each others awesomeness?” – Sonja who wasn’t invited but took advantage of her alone time by trying new laser treatments

Jules went from being useless to being the MVP after she flawlessly tried to remind Luann that there are more important things than being called a mean name, spied on Luann with Carole, revealed she carries Goldfish in her purse and only mentioned being Asian once. You go Glenn Coco! #MostImproved 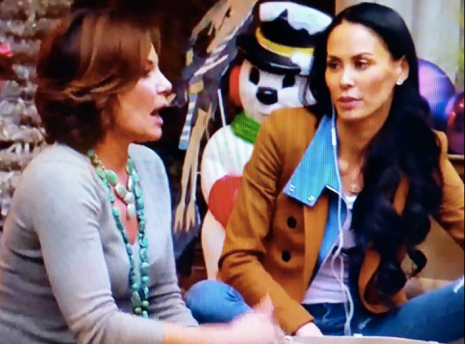 THE CHALLENGE: After TJ bye Felicia’d Brandon and Briana last week because Brandon missed his girlfriend (lame), I was ready for a real elimination and this week did not disappoint. Shocker that worthless Jessica let down Johnny again and they were sent to The Jungle, while Ashley and Cory ended up winning and made a deal with the ginger Devil Wes and hot headed Nany. That will work out. Lol.

Ashley borrowed a cue from Bethenny Frankel and started calling Simone a slut (while she was walking around the house without pants on… #classy). “You’re a weak ass!” she yelled over and over again while accusing Simone of being in love with Wes. I’m on Team Ashley on this one because all of her rants both insulted her butt injury from the soap challenge and her flirting with Wes (who somehow has a girlfriend).

“Like, we don’t really want to go in.”  – Christina and Nate’s sups convincing argument to stay out of the elimination actually worked because of Ashley’s fight with Simone. Also going in The Jungle are newbies Amanda and Nelson.

Simone pulled a white skull without taking her eyes off of Ashley (savage move) and there’s a 99% chance she poisons her drink next week. 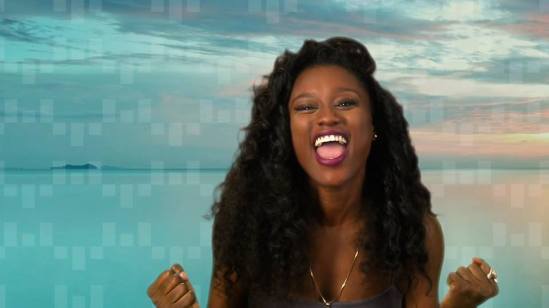 Jessica forgot how to use her brain and couldn’t memorize a pattern and her and Johnny were sent home. “I’m so sorry I let you down! Again!” -Jessica “F**k off.” -Johnny

Oh, Devin and Cheyenne also came back because everyone keeps quitting, but like no one cares but Corey (they’re going to make a fun pair on the next season of Battle of the Exes) and they will probs be sent home (again) next week.

SOUTHERN CHARM: In a plot twist that everyone saw coming, the trip to the mountains was not relaxing or chill like Shep claimed it would be. We started the episode with Whitney still pissed about #NewCraig calling him out about his feelings for Kathryn and leaving early with his new sidekick Cameran (UGH! Homegirl, we were rooting for you! We were all rooting for you!).

“I don’t understand why everyone is upset that I started drama about something that happened three years ago.” – #NewCraig is still #CluelessCraig

After Landon (does anyone else think she is starting to become the worst?) finished flirting with Shep over eggs, the crew went home and the boys headed to another adventure in LA. After partying for a few days, Shep got a call from JD asking why #NewCraig hasn’t answered the phone. Sounds like a perfect way to get that promotion, #NewCraig. #WerentYouSupposedToBeALawyerByNow?

Back in Charleston, Landon’s new “career” had her making candles. Her scents will probably be called “Mary Had A Little Shep” and “Divorce Sucks.” Seriously though, who wants to buy a travel “magazine” (sounds like a bunch of info from a Google search turned into bullet points) from someone who can barely afford to live on a boat? 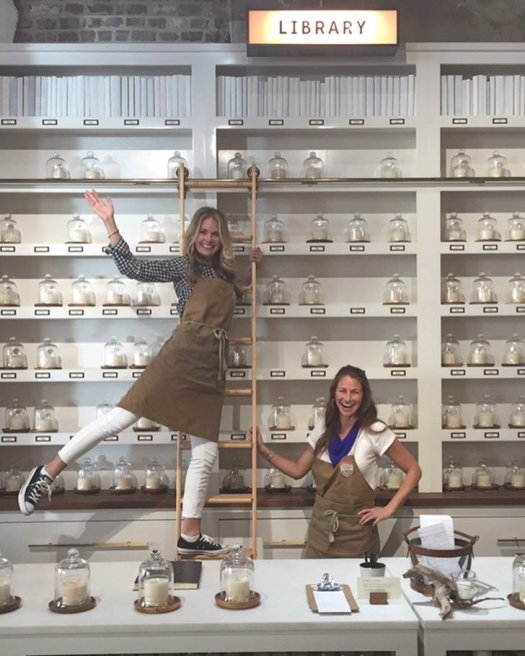 While #HungoverNewCraig got yelled at by JD at the races, another T-Rav was brought into the world.

“Yo T-Rex, let’s call him St. Julien Rembert Ravenel. And doc, make sure this kid is miNe before we sign the birth certificate.”- Thomas after the birth (I’m just guessing).

REAL HOUSEWIVES OF DALLAS: I have to say, I’m pretty disappointed that Brandi and LeAnne are on the road to recovery and becoming friends. The only reason to watch Dallas is to see LeeAnne assault another trolley and walk home without her shoes #CarnyKidProbs. (Sidenote how excited are you for Andy Cohen to point out Brandi has LeAnne as “Loud Mouth” in her phone at the reunion).

Elsewhere on Dallas, Stephanie threw a “Gatsby” themed birthday party for her husband (think less Gatsby and more fugly prom dresses) and Cary had multiple conversations with her husband that went like this:

The most important part of this episode is Brandi got drunk on “Jesus juice” and invited the whole cast to Austin for a weekend getaway. I don’t think shit show is going to even begin to cover this one.