I'm rooting for California Chrome tonight because it sounds like something a Kardashian would name their horse. #BelmontStakes

If you have family or friends that you expect to hang out with you in the next few weeks, you might want to make sure they’re not sports fans. With baseball season well under way, the NBA finals and the Stanley Cup finals, there’s a lot to watch and not a lot of time to watch it. So if you find yourself stuck watching a sporting event over the next few weeks (The Bachelorette is on a break this week), I thought I’d help you decide who to root for, the pop culture way. For example, I want California Chrome to win the Belmont Stakes, not because I care if a horse wins the Triple Crown or not, but because California Chrome sounds like something a Kardashian would name their horse (what ever happened to that pony Kendall got for her birthday, anyway?!).

Stanley Cup finals: LA Kings vs NY Rangers
Celebrity Fans: Celebrities have been debating whether LA or New York is a better place to live/work for years now, and what team they root for is no different. LA has dedicated fan Alyssa Milano, Ellen DeGeneres, Will Ferrell, Jason Bateman, Kobe Bryant and Jon Hamm. New York has Jimmy Fallon, Michael J. Fox, Jim Carrey, Louis C.K. and Olivia Munn. In conclusion, comedians really like hockey, and I think LA wins this category because I would never root against Don Draper.
Colors: While LA rocks all black and NY sports red, white and blue, both teams manage to look good. But, it is June and little black dresses are not a summer stable, so NY and America’s colors win this round.
Hot players: A beautiful tie breaker category (that would only be better if Carrie Underwood’s husband was on the Rangers or Kings).
LA: While Jeff Carter and Drew Doughty are gorgeous…

Brad Richards, Henrik Lundqvist, Dan Girardi and Brian Boyle help the Rangers be the team to root for (if I realized hockey players were this hot I would have watched more games and less of the Mighty Ducks movies). 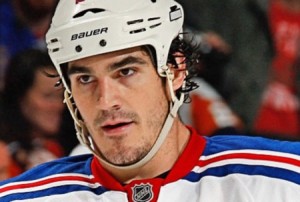 NBA Finals: San Antonio Spurs vs Miami Heat
Celebrity Fans: While I’m sure there is a decent amount of both Spurs and Heat fans, the two I think we need to focus on are Selena Gomez and Justin Bieber. That’s right, Sel is a Texas native and a Spurs fan, while her ex is a Heat fan (he was even rumored to be “banned” from the Miami arena, if that’s not love I don’t know what is). All of this being said, San Antonio wins this category because even though we don’t know what’s up with Selena lately, it can’t be any worse than what’s up with Justin (see racist videos 1 and 2).
Colors: The Spurs’ black and white jersey prove to be a little boring, while the Heat stand out by adding red and the occasional yellow pop to their black and white uniforms. Point one for Miami.
Pop Culture Connections: Sorry not sorry Heat and Spurs fans, but I’m not finding enough for an entire “hot players” category. However, the Heat does have LeBron James, and Lebron has his own app, which score major points. He’s also the inspiration behind “LeBroning,” which took for the internet after LeBron needed to be carried out of the first game because of cramps and no A/C. Basically the Spurs need to do something meme or gif worthy if they want our support.