First things first, the commentary by Zach during last week’s live show that we didn’t originally see (but they showed us in the previously) is the funniest thing ever. I can’t decide if it would be fun to live with him or if I’d rather bang my head against the wall. Now regarding the game, Nicole and Christine won HOH and seemingly became friends again. Nicole nominated Frankie and Caleb, while Christine nominated Donny and Zach. Both of the girls wanted to make big moves, and were planning on evicting either Zach or Frankie. Instead, after Frankie won the BOB (and “beast mode” sat and watched, even though if he actually played he could have really messed up Frankie and more successfully threw the competition), Christine nominated Nicole and sent her packing. The good news? Nicole and Hayden are now in the jury house together and can get to making blonde, dorky babies. In the BB house, Donny and Victoria are the only two left without an alliance, and now that Derrick and Frankie are HOH, things aren’t looking good for them.

Caleb: Caleb’s game should be just fine for at least a few more weeks, but Caleb’s headscarves need to go away. I wouldn’t be surprised if they show up soon on Pretty Little Liars, and A trades her hoodie for a headscarf. Or a combo. #CalebIsA 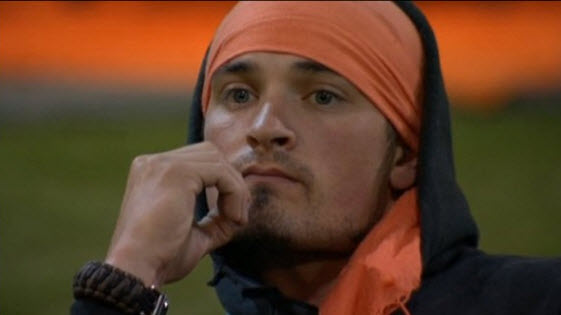 Christine: While I’m upset that Christine backdoored Nicole, I understand why she had to do it. Her game could be in danger in the future because she’s one of the the only girls left in an all boy’s game, but her marriage could be in trouble sooner. On livefeeds, the cameras keep zooming in on her cuddling and touching Cody, and the other houseguests have started to notice. #WhatGameAreYouPlayingChristine

Cody: Speaking of Christine (and her husband), I’m thinking Cody was dreaming about meeting Christine’s husband when he punched himself in the face when he was sleeping. #CodysAbsCantGetHimOutOfThisOne

Derrick: Despite getting involved in some drama with Victoria, Derrick managed to turn the whole thing around and blame everyone else. He continues to be the frontrunner, and I don’t know what is going to stop him. #Derrick4Prez

Donny: I noticed two things about Donny this week. The first, he sleeps with his visor on, and second, he was wearing a shirt I’ve never seen before on the live show! And it was long sleeved! #DonnysSoFancy #YouAlreadyKnow

Frankie:  Am I the only one who is starting to hate Frankie? After getting caught in his game of lies, he tried to use being Ariana Grande’s brother to get back on everyone’s good side. It didn’t really work, but it was hilarious to see the reactions of the houseguests. And to answer your question Donny, I don’t know what a mogul is either. #FrankieDoesntHaveOneLessProblem

Victoria: Victoria said more than 5 words this week! She had more than one scene! She’s still terrible at Big Brother! #VictoriasUglyCryingFace

Zach: This week Zach proved to be even worse at being Gossip Girl than Georgia was in GG season 5. The drama starter tried to get in the middle of Derrick’s game with Victoria, but ended up being the only one who got yelled at. The amazing thing is no matter who Zach fights with and how mad, he sticks around week after week. #XOXOZachAttack