I find myself making lists about unrelated things happening in pop culture during the week, and instead of trying to make them work together, I decided to start writing weekly recaps about my favorite headlines. Big news (hint, hint Bruce Jenner interview in #2Days), prominent award shows and important TV episodes will still get special treatment, but who’s bikini body is getting shamed and 3 pregnant Duggars seem more list appropriate. Here’s what went down the week of April 15th to April 22th:

1. Single Ariana and Miley: Both Ariana Grande and Miley Cyrus ditched their boyfriends, Big Sean and Patrick Schwarzenegger, respectively, and seem to be happier than ever. Here’s hoping these two pop divas start hanging out and make their exes jealous with some wild antics.

2. New Bachelorette Promo: Only 25 days until the world isn’t quite as boring and The Bachelorette is back. If you’ve been trying to forget that Kaitlyn has to share the title with Britt, I have good news for you. There will only be one Bachelorette by the end of the first night, and there’s no way in hell any of these idiots will pick I-don’t-shower-and-I-cry-every-other-minute Britt over badass Kaitlyn.

3. DJ Tanner’s Knocked Up And Needs Help: Fuller House, a Full House spinoff, is officially coming to Netflix and here’s what we know so far: DJ, her BFF Kimmy Gibbler (who I imagine grew up to be just like Kimmy Schmidt) and her sister Stephanie (who I assume is still perfecting that Motown Philly dance) are all living together with DJ’s two boys and Kimmy’s teenage daughter because DJ’s husband, Tom Fuller, died. The only reason I’m OK with Steve not being the father is this means he can come back and sweep a pregnant (did I forget to mention that?) DJ off her feet. Uncle Jesse will be back to teach DJ’s kids how to grease their hair, but there’s no word yet on whether Danny, Uncle Joey, Aunt Becky, Michelle or dog Comet care. The Olsen twins recently spoke out about the show, and said they are “thinking about it” AKA debating whether or not they can take off their over-sized coats and over-sized sunglasses long enough to say “You got it, dude!”

We never stopped 💖💕 RT @andreabarber: Are you ready to be best friends again @candacecbure? #FullerHouse @netflix

4. Courteney Cox is Monica Gellar: When Courteney stopped by Ellen she played Friends: Head’s Up and you could see her inner Monica was out and she wanted to win, which she did because she didn’t have Rachel there to yell out dumb answers. She did, however, meet up with her bestie on the red carpet later that day.

5. The Academy of Country Music Awards in One Sentence: Taylor Swift pretended to be country again for the night, Miranda Lambert is still winning everything, and country music singers are still the only performers who actually sing live.

6. Ryan Reynolds and Blake Lively love-fest: Give Blake a Twitter, Instagram and a new movie to promote, and she shine as bright as the diamond’s Serena used to wear. The notorious private couple is making everyone hate their lives that much more by being super cute all over social media.

7. Prince William On Paternity Leave: THE ROYAL BEBE IS COMING! Yes that’s right, the new Prince or Princess is due any day now and Will has officially started his paternity leave. This calls for nothing but refreshing the E! Online page for the rest of April. (PS Petition to make sure the Royals don’t actually name the baby Alice. I don’t want to associate my new favorite person on the planet with the maid from The Brady Bunch).

8. Kylie Jenner Is Getting The Last Laugh: If you’re looking to kill time, search #KylieJennerLipChallenge on Twitter or Instagram and don’t be surprised if you fail your chemistry exam. Teens around the world are trying to be like the youngest Kardashian- Jenner and instead of using ridiculous amounts of lip liner (like Kylie does), they are putting their lips on a small glass and sucking in as hard as they can. #KylieJennerMoronChallenge

9. Shondaland Drama: There are a lot of rumors flying around about dramas Grey’s Anatomy and Scandal. The problem with Grey’s is there are rumors McDreamy said McBye Felicia and has no interested in season 12. Normally I wouldn’t believe unconfirmed reports, but Patrick Dempsey has not appeared in all of the episodes this season, and his character Derek has been missing multiple times in the same week. As for Scandal, [spoiler alert] Scott Foley’s Jake was stabbed a million times in the last episode and is probably dead. If Jake is dead, there’s no reason to keep watching because I don’t want to watch Olivia cry and Fitz smile his creepy smile. If Jake isn’t dead, this show is taking the unrealistic storylines to a whole new level. #YoureKillingMeShonda

10. Suri Cruise Had A Better Birthday Party Than You: Do you remember your 9th birthday? Did it have 40 friends and a DJ? I didn’t think so. Suri and her BFFs got sugar highs from cupcakes and raged until Nick @ Nite started. Jealous? Me too. 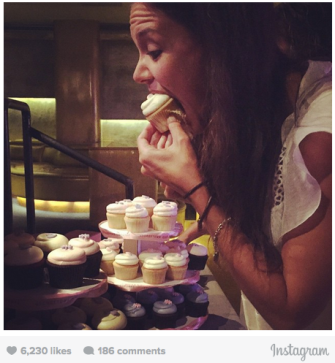 11. Selena Gomez Still Wants You To Come And Get It: After months of hiding from the world because she was sad about the Biebs, Selena is back on Instagram and posting bikini pictures. She’s getting a lot of negative comments because she looks like a normal girl and not a barbie, but it’s not bothering her. She’s all “I know I’m hot and don’t look like a lesbian like my ex.” 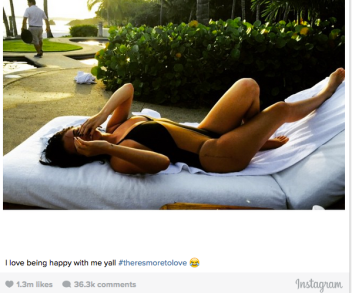 12. Tebow Is A Pretzel: There’s nothing better than quarterbacks who are more like celebrities than they are football players, #amiright?! Tim Tebow was picked up by the Eagles this week, but who knows if he will ever actually make it on the field (throwback to 2011). The good news? He was made into a pretzel, E! will probably re-air his special and that Duggar is still rumored to be into him. 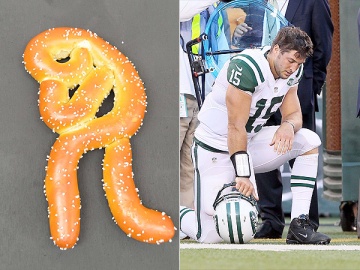 13. Clear eyes, full hearts, Amy Schumer: Amy’s show did a Friday Night Lights parody and it was OP (plus her Tami Taylor was even Connie Britton approved– she tweeted the link). The best part? Amy made a statement about football players and rape that needed to be made.

Bonus Amy: She dove in front of Kimye on the red carpet last night because #whynot? Kanye’s “I hate you” and Kim’s “she doesn’t even go here” faces say it all about the famous couple. 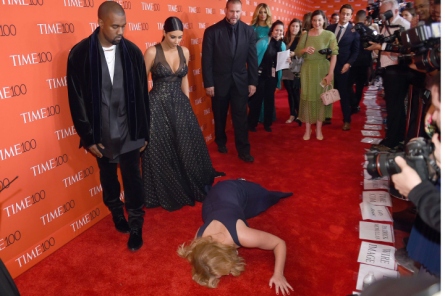 14. So you agree, Sandra? You think you’re really pretty: Sandra Bullock was named People’s Most Beautiful Woman this year, and I think it’s a good choice. The only reason I’m confused is I don’t remember the last time I saw Sandra in a movie or even a movie preview, but hey, People Mag: Employing Actress With Nothing Else To Do Since The Most Beautiful Issue Was Created. 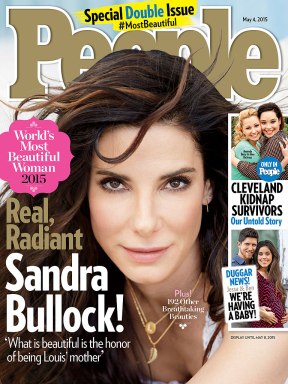