Adam Brody participated in a AMA (ask me anything) on Reddit last week, and his answers made me want to drop everything and rewatch The OC for the rest of my life. He also made me wish Leighton Meester and him would adopt me.

On The OC: “I think ultimately it was a comforting show for people, and I hope it did more of that than reinforce any negative stereotypes or whatnot.”

On Peter Gallagher: “He always told me to grow out my eyebrows. Boom!”

On keeping in touch with his OC castmates: “I’m in constant psychic communication with all of them. And Ben and I also get lunch in this dimension sometimes.”

Specifically Ben: “I do still keep in contact with Ben, but I bully the shit out of him.” #Bromance

On his breakfast: “Not to be too Seth Cohen-like, but I love me a bagel and coffee.” #ArtistWithCreamCheese

On Captain Oats: “I’m not sure what that mofo is up to now!” (I’m pretty sure creator Josh Schwartz has him on his desk. Hopefully with Princess Sparkle near by).

On kissing Rachel Bilson: “One of the all time greats!”

On his time on Gilmore Girls: “It was nice because the people were cool and the writing was great, but also hard because they made sure you said every syllable. In a way I’ve never seen before or since.”

And how much he loves her: “Infinity.” SWOON! *Heart eyes emoji.*

And their dogs: “They get along famously. Penny had to bitch slap Trudy once in the begging, but we feel it was good for her.” 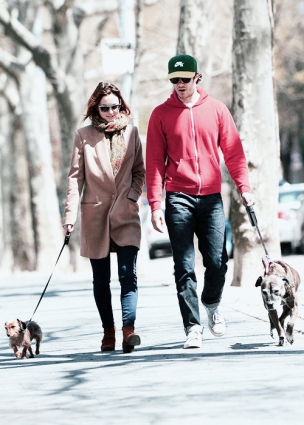 On their marriage: “The best thing that happened to me, aside from my marriage, IS my facial hair.”

And advice to someone who’s girlfriend loves Adam: “Transfer her affections to Adam Driver.”