Derek Jeter is engaged to Hannah Davis. It has taken me a week to write about this life changing news, and I’m still not sure if I believe it. Here is the process to  acknowledging Jeter’s decision to marry someone who is not me or Minka Kelly.

1. There is no way. Derek is not getting married.

2. Especially to a 25-year-old swimsuit model. She 16 YEARS younger than him.

3. He could marry me– I’m only four years younger than her!

4. Her Sports Illustrated cover was not classy.

5. Is he really marrying someone who co-hosts Project Runway JUNIORS? Derek is so above Lifetime.

8. I think he is just settling because he is ready to have kids.

9. Is he going through a midlife crisis?

10. What about Minka? He should marry Minka!

11. I think he misses baseball and is just looking for something to fill his time.

13. He confirmed it on his blog? It is probably a typo. Or maybe his website was hacked?

14. Hannah’s wearing a ring? She probably bought it for herself.

16. I bet she is blackmailing him. She must be threatening a tell all book.

19. There is still plenty of time for him to back out and call me.

20. @MinkaKelly do you want to crash the wedding with me?

22. There is literally nothing worse than Hannah’s stupid DirecTV commercials.

23. WHY WOULD DEREK MARRY SOMEONE WHO TALKS TO A HORSE?

24. I bet she doesn’t understand baseball.

25. SHE BARELY GRADUATED HIGH SCHOOL WHEN HE WON HIS LAST WORLD SERIES. 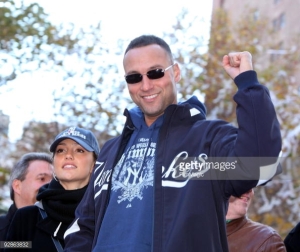 27. I cannot even talk about the fact that she was 6 when he won his first World Series.

28. Did I mention he should marry me if he’s into younger girls?

29. I am going to ignore this and will (maybe) believe it when I see a marriage license.

I go on a long rant about how Derek should marry Minka Kelly or me in the latest episode of We Love The 2000s. Check it out here.

One thought on “29 Stages Of Accepting Derek Jeter’s Engagement”