Another year, another Super Bowl. Last year around this time, I rooted for the Broncos because I wanted to see Eric Decker celebrate a big victory on his reality show with wife Jessie James Decker (RIP to Eric & Jessie: Game On… and Eric Decker’s chance of a Super Bowl ring). This year, I’m cheering for the Seattle Seahawks against the New England Patriots and here’s the many unconventional (but totally reasonable) reasons why:

1. Seattle Grace/ Mercy West Hospital: You can’t root against the city that Meredith Grey and Derek Shepard save lives in.

2. The Seahawks uniforms: The navy and lime green uniforms make the Seahawks the best dressed team in the NFL.

3. Starbucks: It would be unAmerican not to celebrate the city that gave us the closest thing  we have to heaven on earth.

4. This guy: This one speaks for itself.

5. They’re in touch with their feelings: Amen, Russell Wilson, AMEN.

6. Bike celebration: I would love to see these bikes make an appearance at the Super Bowl.

7. Celebrity fans: I love Ben Affleck and Matt Damon, but if was going to have a Super Bowl party I’d want to watch the game with Seahawks fans Chris Pratt/Anna Faris (and their adorable son), Will Ferrell, Chrissy Teigen, Macklemore and Joel McHale.

8. Katy Perry: Super Bowl halftime performer and all around superstar KP is rooting for the Seahawks.

9. The Seahawks made the following memes possible. 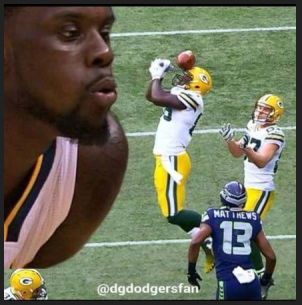 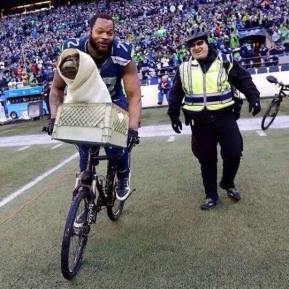 10. Richard Sherman’s hair (and parenting advice) are hard to deny.

11. This gif: I think we all want to see this celebration during the big game.

13. They aren’t cheaters: The Seahawks can handle their balls.

14. Bruce Irvin’s kid: I want to see this cutie again.